Gene Searchinger was a filmmaker in search of a big idea in the late 1980’s.

Earlier in his career, Searchinger wrote, shot and directed highly-regarded documentary films that tackled complex subjects in a manner both educational and entertaining.  His deft touch was not lost on Philippe de Montebello, the Director of the Metropolitan Museum of Art in New York City, who hired Searchinger to make a film about the museum’s prize acquisition in 1971, the “Portrait of Pareja.”  Subsequently, Searchinger made a series of films for the Metropolitan Opera entitled Live at the Met, which were broadcast on PBS during the intermissions of the Met’s productions.

It was Searchinger’s collaboration with Philip Slater, the renowned sociologist and Harvard professor, on Paradox on 72nd Street, which served as a portent of The Human Language Series two decades later.  Paradox dealt with abstract concepts not suited to film and Searchinger endeavored to let his camera—and not a “talking head”—speak to his audience.  So he filmed and filmed to create a visual narrative and then meticulously edited the sequences to produce a naturalism that dissolved the wall between audience and subject.

When Searchinger embarked on The Human Language series he soon realized that he had taken on the challenge of a lifetime.  Not suited to the typical 26-minute format of most documentary films, his sweeping vision would be played out over three, hour-long programs.  Vast and complex, the discipline of linguistics straddled the divide between sciences and humanities, and so, Searchinger’s proposals were the first to be simultaneously funded by The National Science Foundation and the National Endowment for the Humanities.

To breathe life into the film, Searchinger enlisted the support of dozens of luminaries in the field of linguistics (and related subjects) including Noam Chomsky, Stephen Pinker, Stephen Jay Gould, George Miller and Mark Aronoff.  These collaborations resulted in a film series that was universally praised and debuted before PBS’s second largest audience.  Today, The Human Language is part of the library collections and course work of more than two thousand colleges and universities around the world.

Searchinger completed an equally ambitious bookend film series to The Human Language in 2008—The Writing Code. 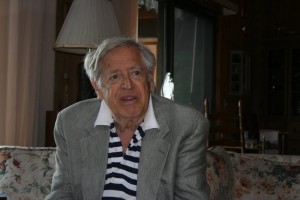